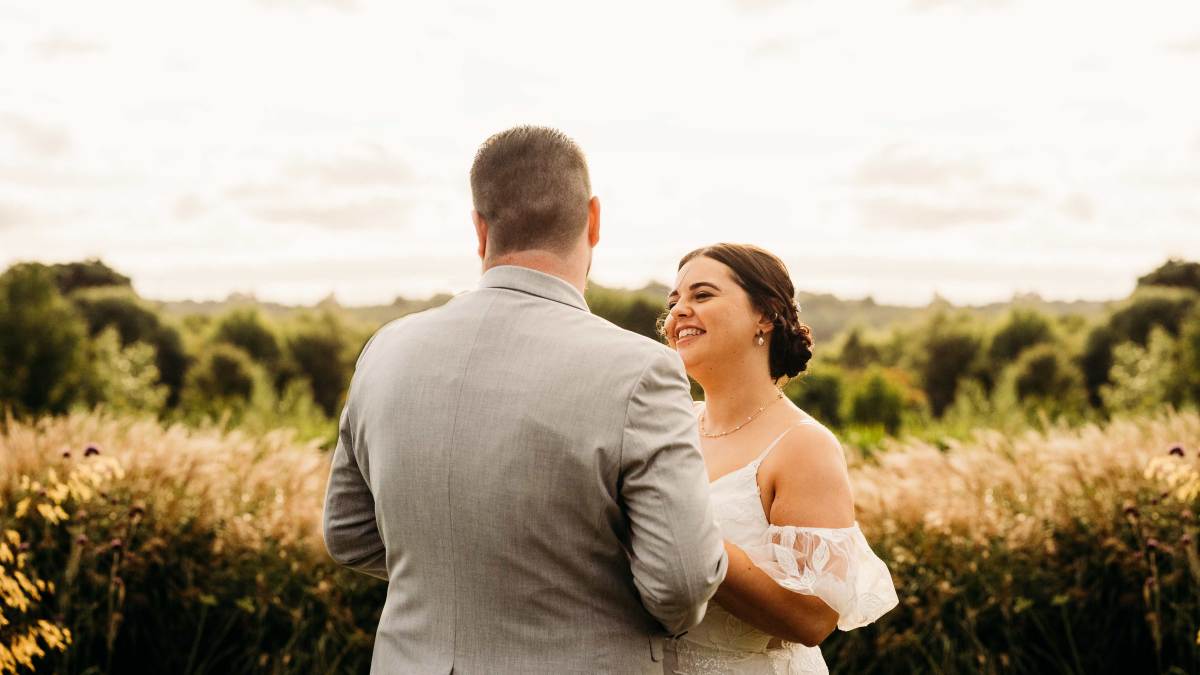 On the 17th of September, we were invited as wedding videographers to shoot Emily & Josh’s beautiful summer wedding at the prestigious Abbeywood Estate in Delamere, Cheshire. A forty-five acre countryside estate with beautiful views in every direction.

The happy couple couldn’t have made us feel more welcome, as we arrived Soph took off to capture some beautiful photos and video of the bridal preparations while Matt stalked the grounds looking for that all important establishing shot of the venue, before Josh arrived with groomsmen in tow.

The bridal prep was relaxed and prosecco flowed as Emily and her bridesmaids had their look meticulously syled by Poppy Michelle Hair And Makeup , a fabulous company based not too far away and who were so accommodating with our videography and photography needs. And I think we can all agree that Emily and her bridesmaids looked absolutely gorgeous!

In the meantime, Matt was discovering the venue’s very own resident wildlife, from the sheep quietly hanging out in the shade of the trees that line Abbeywood Estate’s lush lawns, to the sparrows and finches darting to and from the many bird-feeders they have dotted around… and of course the beautiful and nonchalant Maine Coon cat – whose name we never learned but who looked on with mild curiosity as Mat lay in wait for the perfect slow motion ‘birds in flight’ shot.

The weather was clear and sunny for most of the day, which provided a beautiful, late summer feel to every piece of footage we captured, and allowed us to play with the light during outdoor video shoots throughout the day, and as the guests gathered on the lawn for the wedding ceremony, we were introduced to Emily and Josh’s little girl Eliza – the true star of the day. Such a cute kid who accompanied Emily’s sister and bridesmaid down the aisle ahead of the gorgeous bride.

Having set up tripod shots from the perspective of the day’s celebrant, as well as from the side, we were able to get great coverage of Emily’s walk up the aisle to one of her favourite songs (an acoustic rendition of You Got The Love by Florence And The Machine, performed by an acoustic duo whose name we can’t remember 😉 – The Distance),  accompanied by her father and eagerly awaited by Josh in his elegant light grey suit.

In order to capture audio, we’ve recently invested in a couple of Rode clip-on microphones which have proved incredibly valuable when recording outside. Placing them in the inside pocket of the groom allows us a quick and discreet way of capturing a good signal from both the bride and groom during the wedding ceremony, while usually being close enough to the celebrant to pick up their speech as well.

Before long we were preparing for the wedding breakfast in the beautiful Orangery, among the gorgeous floral decorations of Flossie’s Weddings, and we shot the speeches entirely handheld. It’s nice having two people on the ground as we’re able to catch a great head-on shot for whoever’s speaking, as well as either a second angle of the main speaker, or reaction shots of the bride and groom’s friends and family. This proves incredibly useful later in editing, as it allows us to mastly use the genuine reaction that happened in the moment. As well as making us feel more honest, this also generally syncs up with the audio far better.

The evening celebrations were a joy to film, with Emily and Josh’s first dance taking place just as the sun was disappearing over the horizon and sending shafts of dappled light through the glass walls of the Orangery. This gave us a wonderful scene to film and a great potential end to a wedding video.

As the party proper kicked off, we were able to switch to a more low-light appropriate setting on the cameras, allowing us capture some great dance floor action, all colourfully lit by a great DJ called Colin who represented North Wales Celebrations . He kept the crowd up dancing all evening, and just as we were thinking about making a move for home, it came to our attention that preparations were being made by the day’s photographer Paul Waring for a fantastic sparkler aisle shot just outside in the cool night air.

We simply had to stay for this, and we’re so glad we did, because it turned out that THIS was the end sequence we needed. Shooting in 50fps allowed us to slow down the action just enough to make those sparks dance through the air in a more lazily elegant way, and the crowd were on point with their waving, too!

We’d like to extend a particular thank you to Paul for allowing us to shadow him for most of the day – we did our best to stay out of his shots, but some degree of patience on his part MUST have been required 🤣

Most of all, thank you to Emily and Josh for having us as your abbey wood estate wedding videographers. We’re delighted with the final result of your wedding video and we hope you are too!

Stay in the Loop

@thetaylorsfilmandphoto
Our FILMS
The FAQ
Read OUR Journal

The Taylors are a film and photo team based in Cheshire, England and travel worldwide.